Conveyors used in plastic manufacturing environments are generally belt conveyors. Flat-bed conveyors are typically used in conjunction with robots. The robots ‘pick’ and ‘place’ components onto the belt, within a guarded area. The belt can either run at a continuous rate or can be set to index forward a set amount when sent a signal from the robot. Sensors are sometimes employed to ensure that the previously deposited item has moved clear, and to sense if the conveyor belt is at capacity.

Incline conveyors are generally used to remove products from underneath a production machine, i.e. when they free-fall from the production tool.

The belt usually has a series of raised flights designed to stop products from rolling back down the incline.

At the input end (lower) of the conveyor, it is common to have a feed hopper that prevents falling components from bouncing clear of the belt.

At the output end of the conveyor, particularly if there is a horizontal section, a sprue separator may be added. Sprue separators are most commonly used in cases where a material runner system is also present, preventing the need for manual sorting. 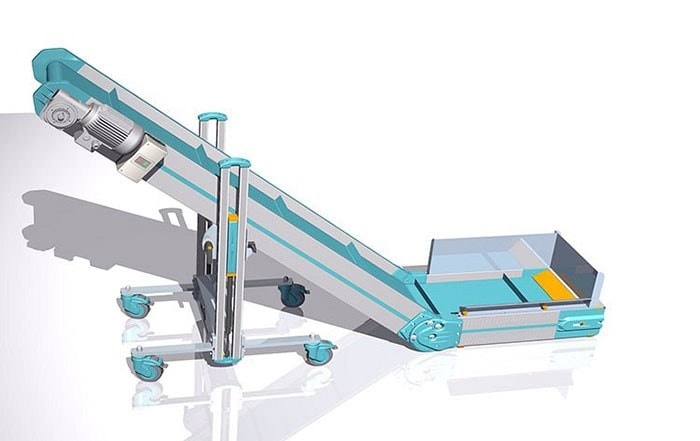 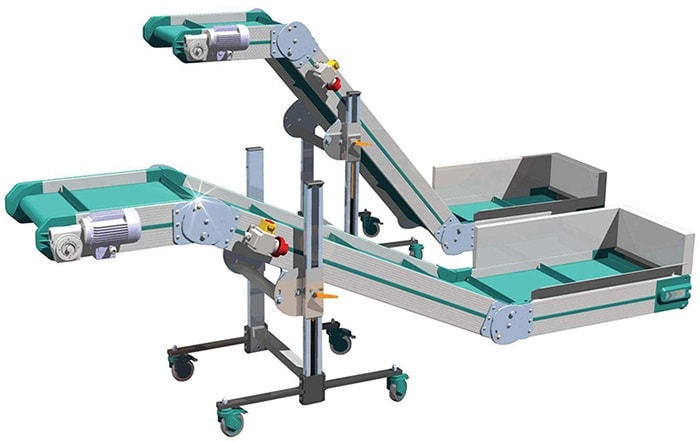 These systems consist of multiple conveyors. These provide a continuous loop that enables the transportation of materials around a production plant or other facility. The materials used for belt manufacture can be specified, depending on hygiene requirements, the temperature of product, etc. 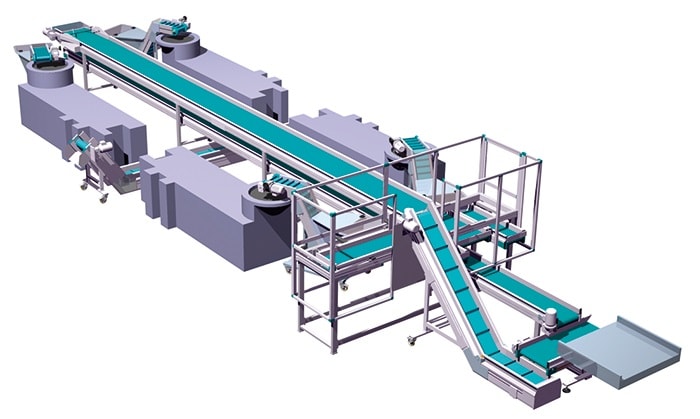 Weighing and counting equipment can be incorporated into a larger product handling system. For example, bag filling carousels can be fed by a conveyor that is transporting finished products away from the production equipment.

Weighing equipment can be used to either provide a packaged weight of the finished product or more frequently, a set number of packaged components. In the latter case, this is achieved by determining the weight of a single component, so that when, for example, 100 components have been added, the container is replaced with an empty one.

Sorting equipment most frequently takes the form of a sprue (runner) separator. This uses a rotating drum or paddle system to physically separate moulded components from their feed system, i.e. if both are ejected from the moulding machine together. Following separation, a conveyor may transfer the components to another station, for weighing and packing for example. 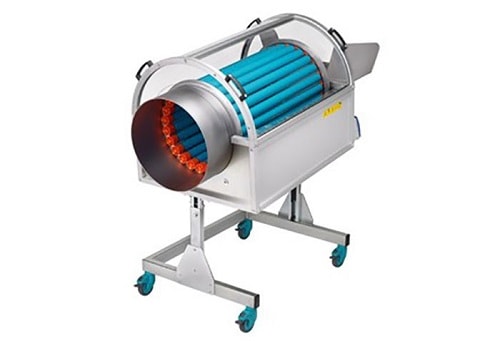 Separators are typically situated at the output end of a conveyor, either directly attached to the frame, or free-standing in the case of larger units. They are designed to remove the need to manually separate moulded plastic products from any runner systems or sprues.

Rotating paddles or rollers are used to achieve this task. In the case of conveyor mounted units, paddles are the most common solution. The gap between the rotating angled paddle blades and the upper surface of the conveyor belt is set so that either the moulding or the unwanted item is swept to the side and into a separate container.

Free-standing units most frequently use one or more adjustable rollers to achieve the task of separating mouldings from runners or sprues. They usually have a feed hopper mounted above the rollers to channel components as they fall from the output end of an inclined conveyor.