Clamping Force: Why It’s Vital to Your Injection Moulding Process and How to Calculate It

Clamp force is one of the most overlooked portions of the injection moulding process. How many times have you walked up to a moulding machine to see the clamping force set to max? So, what is clamping force? Why does it matter? And how do you calculate it? Jim Clifford, Consultant for RJG investigates in this blog article.

What is Clamp Force?

Available clamp force is the clamp tonnage the machine is capable of. The machine needs to have enough clamp force to hold the mould closed to withstand the plastic pressure that is being developed inside the mould cavities and the cold runner. We generally recommend calculating the clamping force each individual part needs rather than running it at the machine max.

Why Does Clamp Force Matter?

How many parts do you run in your plant where every critical dimension is running right at the mean or the centre of tolerance? In a perfect world, you would say all of them, but we all know this isn’t a perfect world. The majority of the time, there are a few critical dimensions that are in tolerance but close to the high or low end of the limits. If the clamping force is adjusted without being optimised, you may be at risk of throwing some dimensions out of spec. This can be even worse if you are already running under a deviation to your customer.

How would it look if you went back to your customer and said you needed a deviation for an even wider tolerance on a critical dimension? Then the next time it runs, it is started up with the clamp tonnage back at the original setting, but now the dimension has changed. This could get you going down that rabbit hole again.

Here’s an example to show how important clamp force actually is.

I recently ran a sample in our lab, only adjusting one set point. As you can see below in Fig. 1, this changed the peak shot volume, peak cavity psi, pack rate, and cooling rate. It also affected the length, width, and thickness of the parts. What variable could I have possibly adjusted that made the process go sideways? 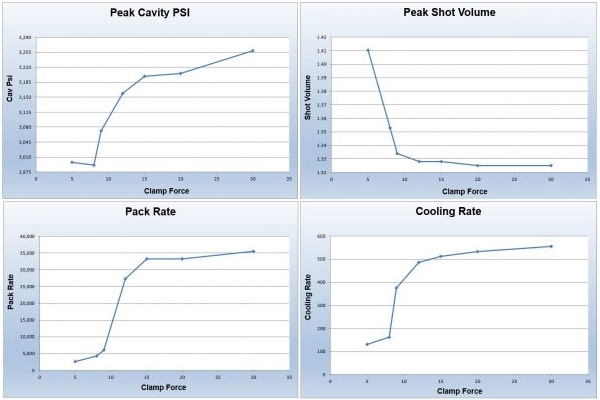 We should look at this from the plastic’s point of view using the four plastics variables: Heat, Flow, Pressure, and Cooling. Which of these variables would have the most effect on the part dimensions?

I know, I know… it was a trick question, but it’s so important that it has even been referred to as the fifth variable. Most people wouldn’t even think twice about this adjustment having any effect on part dimensions, but it can completely change what is happening in the cavity. Too often, people make other adjustments to the process to get dimensions back inside tolerance without ever considering clamp force.

How Do You Calculate Clamp Force?

Once you have calculated the projected two-dimensional area of all parts and runner, multiply it by the material supplier’s recommended clamp force—they generally supply this recommended clamp force in tons/in² (see calculation in Fig. 2 below). This calculation will get you in the ballpark for the amount of clamp force needed, but it may not be exact. When material suppliers establish the clamp force requirement, they are not doing it on your exact mould. If you want to get this required clamp force more accurate for your particular part, you can use average cavity psi if your mould is equipped with cavity psi sensors.

For example, let’s use a mould that has a Post Gate pressure of 9,000 ppsi and an End of Cavity pressure of 3,000 ppsi. When we add both of these pressures together and then divide by two, it will give an average cavity pressure of 6,000 ppsi. Since we rate injection moulding clamp forces in tons, we will need to divide the 6,000 ppsi by 2000 lb, which gives us 3 tons/in². You can now use this clamping force to multiply by the total projected area to establish the recommended clamp force for your mould. This formula can also be found in Fig. 2 below.

If we had gone by the material supplier’s recommended clamp tonnage of 3 tons/in², we would have run the clamp tonnage at 25 tons. By optimising the clamping force based off part weight, it allows the mould to vent easier, prevents over clamping, and allows for energy savings. 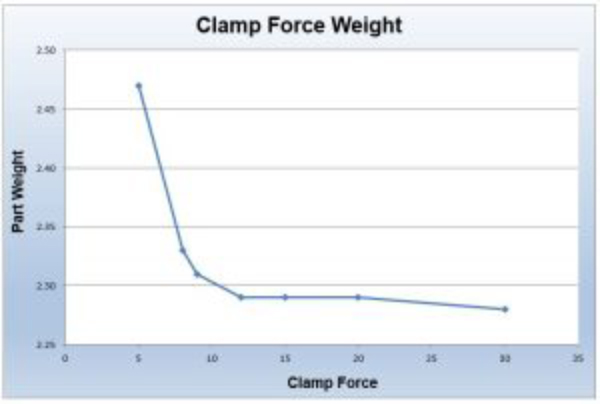 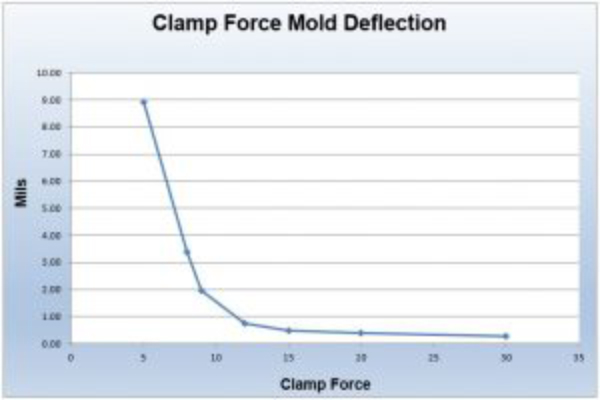 While running the sample, I also decided to take part measurements at all of the clamp force settings. This was a basic rectangle part, so I measured length, width, and thickness. I was surprised to see that all three dimensions shifted at the different clamp settings as well. 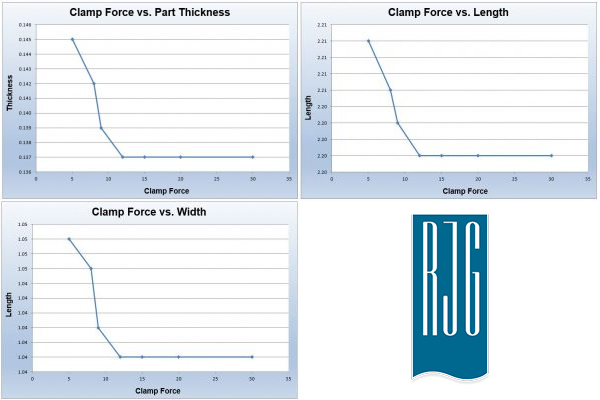 If you have a part that is running at the high or low end of tolerance on critical dimensions, a change to clamp force could throw the dimensions out of tolerance, affect venting, and cause tool wear or damage. So, the next time you see a shift in your process or part dimensions, make sure to look at the four process variables as well as the clamping force before you make changes.

This article was written by Jim Clifford of RJG Inc. To read more technical blogs like this one, visit the RJG Blog Archive.