How Green is My Product? Designing for Recycling

It can be challenging to manufacture plastic products that are genuinely ‘green’ – reusable, recoverable, remanufacturable and if all else fails, recyclable. So, where are we at as an industry today? This blog from the BEC Group highlights the good, the bad, and importantly, what must be done to meet future goals for plastics recycling and a circular economy.

Taking Responsibility: To Use or Reuse

EU Directive 2019/04 prohibiting single-use plastics is set to revolutionise the plastics packaging industry by 2025. The world’s main FMCG (Fast Moving Consumer Goods) makers have already signed a key document drawn up by the Ellen MacArthur Foundation, the international non-profit association advocating the establishment of a circular economy. They have committed to reducing the amount of virgin material in packaging and increasing returnable PET (polyethylene terephthalate) quotas.

The world is changing.

Today’s UK plastics industry is heavily reliant on imports of raw materials and machinery, primarily from EU countries. It is also a big importer of plastic goods, but the domestic industry is well represented across the whole plastics supply chain; from producers, distributors, equipment, additives and masterbatch through to plastics processors and recyclers.

The UK market used to be dominated by big chemical companies; it is now more dispersed, with a portfolio of often highly specialised businesses. Engineering plastics are a particular domestic speciality.

The good, the bad and the unacceptable

The prevalence of plastics is down to their unique set of properties. They are light, strong, cheap and mouldable, all of which cut production and transport costs and can reduce carbon emissions. They have revolutionised medical hygiene and food preservation. Manufactured plastics are inert; they do not interact with medicines or foodstuffs. They are lighter than other materials, such as glass and ceramics. They are easier to handle and less likely to break. They are essential to modern life.

Despite these success stories, the industry’s image has not been great for a while. David Attenborough’s Blue Planet II series highlighted the growing – and genuine – problem of plastic waste. This goes alongside wider concerns about microplastics, the structure of the domestic recycling system, the ‘out of sight out of mind’ approach to waste disposal and the industry’s dependence on petrochemicals.

Should we abandon plastics? The facts suggest not. In addition to its advantages in practice, it is a major industry in its own right. It employs 166,000 people across 6200 companies and is the third-largest employer in UK manufacturing. Every year, the UK produces 1.8 million tonnes of plastic material and processes 3.2 million tonnes. About a third of all plastics and plastic products produced in the country are exported, with a total value of £8.2bn.

It turns over around £25.5bn annually.

The most visible and widely-used plastic products are used in packaging – especially food packaging. There is an argument for abandoning plastic for natural products, like paper, or ‘recyclable’ materials, like glass. But that is far from the end of the story. The energy involved in manufacturing alternative packaging, whether aluminium, paper or glass, is not to be dismissed. And paper hangs around in the environment for years, as well; it does not decompose overnight.

Glass is expensive to collect, sterilise and reuse and is costly to remanufacture when it breaks, as it does every few cycles. The energy involved is intense. It grinds down to small granules – but so does plastic!

But plastic needs to get its act together in order to promote the responsible image that the industry would like. Some of the problem is simply about image; the advantages of plastics are overwhelmed by the sight of polluted rivers and beaches, badly affected wildlife and news that the most recent exploration of the Marianas Trench in the Pacific Ocean found an undegraded plastic shopping bag at 10,000 metres’ depth.

The industry in the developed world has a generally pretty effective collection infrastructure. What it does not have is an effective recycling and reuse industry – a circular economy, as the Ellen MacArthur Foundation describes it. Far too much plastic (and other waste) is collected and then sent overseas to developing economies that supposedly are going to recycle it. That is simply not the truth: it ends up in rivers, rubbish tips, beaches and the sea.

China used to be the world’s number one importer of post-consumer plastics; it has put up the shutters. So has Malaysia and other countries in Africa and SE Asia are likely to follow suit if they have not done so already.

There is no alternative: the industry has to get its house in order. Circular manufacturing has to become the norm.

There are challenges – not least, how polymer molecules degrade under the pressures of regrinding and reprocessing. Do they have a second life? Are they reusable, or is landfill or incineration going to remain the ultimate destination indefinitely?

Some plastics are already quite well established as reusable, in one way or another. PET (polyethylene terephthalate), the plastic bottle material, can be recycled to original use, including at food standard. A big question is: how often? According to Krzystof Bruski of machine manufacturers Engel, the limit has not yet been reached. However, it is not entirely simple and straightforward.

Paul Holland, Design and Innovation Manager with BEC Group, observes that characteristics such as plasticity, hardness and resistance will decline with each reprocessing. Getting precise information is not easy; there is still a lot of ‘black box’ mystery about reprocessed material.

“I asked one supplier about fire retardancy, and they said they could add the chemicals to ensure it. However, when I have encountered failures in use, the response has been – too often – ‘well, it’s regrind’,” he said.

Degeneration is often down to contamination of the regrind or flakes. German company Gneuss Kunststofftechnik GmbH, which specialises in machinery for polymer reprocessing, says that filter technology, especially, has advanced so much that even very small pollutants can be removed by filtration. Italian company Sukano AG says that its range of masterbatches can be used to restore molecular integrity and performance to ‘as new’ standards.

The more demanding the application, the more important it is to know exactly how the plastic will perform in use. Thermoformed engineering plastics, for example, do not have a reputation for recyclability.

Whatever the claims about reprocessing and chemical solutions, manufacturers must be in a position to know exactly what is in the material they are using in order to assess how it will perform. It’s fine to ‘downcycle’ to less demanding applications; that takes plastic out of the environment for another decade or so, but, ultimately, reality cannot be avoided.

The industry has to design responsibly. Genuinely reusable plastics must be developed and become as much part of the production landscape as recycled aluminium is in the auto and packaging industries. And the differential in the carbon footprint and energy cost of using recycled material has to be narrowed.

In the next in this blog series, we will take a closer look at compounds that are currently available, what can be done with them and the technology needed to make circular manufacturing a reality.

People Against Dirty, which was set up to create domestic cleaning products that are sustainable and ecofriendly, is better known by its two principal brands: Method and EcoVer. Method was founded in 2001 in California, USA. European company Ecover launched the World’s first phosphate-free detergent in Belgium in 1979. The two companies merged in 2012; its product formulas are all bio-based and biodegradable.

EcoVer detergent was originally packaged in HDPE (high-density polyethylene), blended with some plant-based plastic. As one of its USPs (unique selling propositions) is purity and clearness, it looked at options for a fully recyclable bottle. When it added plant-based plastics to HDPE it found that it struggled to achieve the necessary specifications with 100% recycled HDPE but was able to do so with 100% post-consumer rPET (recycled PET).

rPET usually contains some impurities, which makes it very difficult to make crystal-clear bottles. The company decided to make a design feature of the greyness and turn what had been seen as a negative characteristic into an advantage.

People Against Dirty approached the Nottinghamshire base of Anglo-American company R&D Leverage for help with the final design and for production tooling. The whole process of change and refinement took around six months. Particular attention was paid to the bottle’s ribs, which help to bring light and refraction to the top of the bottle, and work well with the clear liquid inside, as well as being an eyecatching on-shelf feature.

Acknowledgements to People Against Dirty, R&D Leverage and PETplanet Insider. 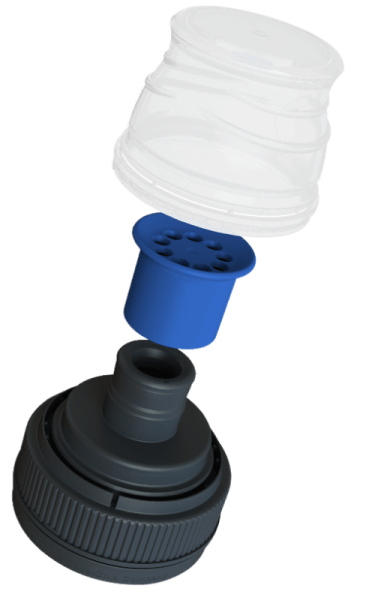 The 3-piece Mercury Sylon sports cap design has been developed as a single HDPE resin solution, moving away from Polypropylene for the overcap.

Coca-Cola Amatil (CCA) in Sydney, Australia, which has a track record of innovation in bottling, serves a market that includes New Zealand and South-East Asia.

With consumer and legislative pressure to improve the collection and recycling of plastic packaging across its markets, CCA recognised the need to address the construction of its sports cap closures, which had traditionally been made of two types of plastic: HDPE and PP (polypropylene).

The sports cap is a three-piece closure, comprised of the base, slider and overcap. The external base tamper band is located at the bottom of the thread, and there is a second tamper feature where the overcap joins the base. The distinct characteristics of the two materials had advantages in the caps’ performance but added an additional layer to the manufacturing process and made them difficult to recycle. The presence of two materials complicates recycling and adds an additional layer to the manufacturing process, so the decision was made to go with just one: HDPE. Its strength and rigidity characteristics are different from PP, which meant that attention had to be paid to structural integrity during the design process. Weight was not so much of an issue, as the sports cap is a premium product.

The decision was taken to redesign the cap to be made entirely from one type of plastic: HDPE. The elimination of PP meant that a lot of attention had to be paid to structural integrity. Challenges encountered in the two-year process of development included getting the slider to perform properly and ensuring that the spout dispensed at the right rate and achieved specified ‘drip performance’.

UK-based design company Universal Closures worked closely with CCA, Husky Injection Molding Systems ANZ and Austrian company Z-Moulds to develop the right product, which built on existing ideas but has fewer moving parts, which means that machinery is easier to maintain and the cap itself is easier to use in practice. It was the first in the world to be approved by Coca-Cola Corporation.

This article was written by Ruari McCallion for the BEC Group. To read more about plastics and plastics recycling, visit the BEC Group Blog Archive.