Want to Re-shore your Plastic Component Manufacture, but Don’t Have a Tool or Drawings?

It’s a common enough issue.  Your current overseas manufacturing partner very helpfully helped to design your components and manufactured your tooling, but now you’re stuck with them!

This informative case study from LVS Quality Measurement Services demonstrates how they worked around this common issue.

Telford based LVS QMS have the equipment and skill sets to allow them to work backwards from a sample component.  They can accurately measure external and internal features and then ‘digitalise’ these datum points to produce a fully rendered and dimensioned 3D model.  This CAD file can then be used to manufacture new tooling.

However, their in-depth knowledge of component design and material selection allows them to also enhance a product, i.e., rather than just making an exact duplicate.  After all, if you are going to the expense of having a new production tool produced, why not also launch version 2.0 of your product.

Here is a recent example of a project undertaken for a very ‘high-end’ automotive client.  In this case, their customer wanted to improve an existing product but no longer had the original drawings.

The brief was to replace an existing method for topping up an under-bonnet hydraulic oil reservoir.  This was traditionally done by removing the sealing cap from a plastic bottle containing the oil, then inserting a bung into the bottle’s neck that incorporated a silicone tube with an end probe that was inserted into the reservoir.

Stage one was to accurately measure the ‘male’ thread form of the bottle, which was non-uniform rather than matching a known standard.  This was done using a Contour Measurement Machine and used to produce a circular digital rendering of the thread.  Specialist software then generated a mirror thread, i.e. as a female form that could be incorporated into the new assembly. 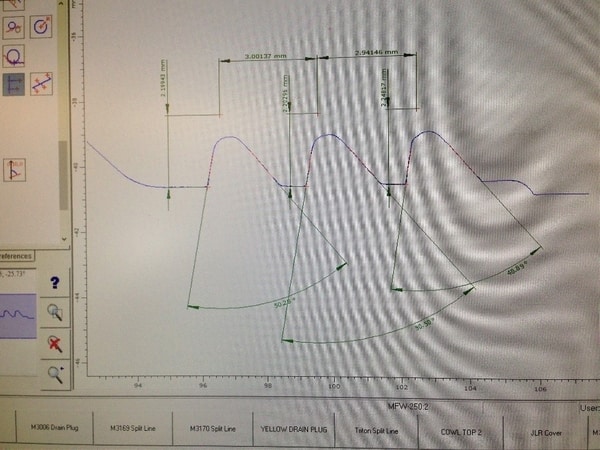 Shadow-graph of the male thread form

Stage two involved the measurement and digital rendering of the original solid bottle cap, as well as the end probe.

Stage three required the now completely modelled old components to be combined into a new cap design with an integrated hose-tail section, the later copied from the end probe.  A new internal sealing ring was also designed and added, this to prevent leakage when the oil bottle is inverted.

Stage four involved the selection of a suitable plastic material, in this case, HDPE.  Allowances were then made for material shrinkage rates, as well as the required tolerances for thread meshing and sealing surfaces.

Stage five required production tooling to be manufactured for all components.

If your company has a reverse engineering project you would like to discuss, then contact Stuart Windsor using the information below.