On behalf of PlastikCity, Plastribution’s Mike Boswell sheds some light on the recent material price falls within the industry…keep calm & carry on? 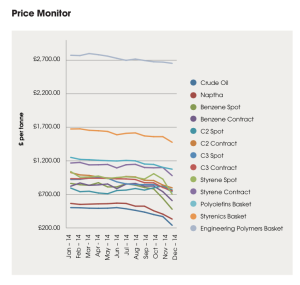 As shown in the graph opposite, which combines polymer feedstock and crude oil pricing, falling oil, gas and energy
prices are continuing to place deflationary pressure on the price of all polymers.

Inevitably commodity grades tend to react most rapidly, although it is notable that the amplitude of change tends to be much less severe than the movements seen in oil prices. Furthermore supply and demand will also influence pricing and hence the reason why in the polyethylene market we have seen a mixed response on pricing as certain materials and grades remain in very short supply.

Such rapid price reductions have not been seen since the 2008 ‘Lehmans Shock’/banking crisis. However, after the crash, in the second half of 2008 there was a sharp bounce and strong recovery in prices as depicted in this graph.

However, two contrasting factors may both have a part to play in what happens to polymer prices going forward:

Crude Oil Prices
Whilst there has been criticism of OPEC for not cutting production, the real cause of global oversupply of oil relates to the exploitation of Shale Oil & Shale Gas in North America. However, given that ‘Shale’ wells have a very short life of less than 18 months, it is expected that the current low prices will soon bring supply and demand back towards equilibrium. In the meantime, polymer producers continue to enjoy low feedstock and energy costs, which enables them to remain profitable at lower selling prices.

Polymer Supply and Demand
Following the losses polymer producers incurred as a result of holding high inventories as the market price of polymers crashed immediately following the Lehmans Crisis in 2008, the producers have become far more conservative and have closely matched polymer production with demand. In the current market, this has enabled polymer producers to limit the extent of the upstream price reductions they have passed through into polymer selling prices, and effectively they have managed to enhance margins and profitability.

Outcomes
So it appears that there are two competing factors with regard to polymer pricing going forward, and this could lead to a range of possible outcomes. However, if crude oil prices continue to remain depressed, then the likelihood is towards lower polymer prices, albeit with polymer producers enjoying better levels of profitability.

A further possibility is that the rapid decline in crude oil prices could result in an economic shockwave of uncertainty, which then results in a broader collapse in commodity prices and further destabilises the fragile state of the global economy. Although it is hoped that such calamity can be avoided and that lower oil prices stimulate economic growth.